One of the towns of the Vega Baja (Low Fertile Valley) district of the southern Costa Blanca, Almoradi is situated on the northern side of the River Segura, close to Rojales and the smaller village of Algorfa.

Almoradi is a medium sized town with a population of approx 19,000 (2011) and is part of the Communidad de Valencia in the province of Alicante. By distance it is 15 kilometres from Orihuela, 47 kilometres for Alicante  and 195 kilometres from Valencia.

According to legend, Almoradi was founded by a king called Brigo in 1196 BC and was called Amarión it was later settled by Greeks, Carthaginians,  Romans and the Visigoths. After this came the Arab occupation and it was  the Moors who gave the town its present name (which means "my will and my desire"). Re-conquered for the Christians in the mid-thirteenth century by the crown of Castile, Almoradi came under the auspices of the town of Orihuela, both were later annexed to the Kingdom of Valencia by Jaime II (James II) of Aragon. Almoradi became an independent town in 1586.

The great earthquake of 1829 (21st March) totally destroyed the town and it had to be completely re-built, very little remains of Almoradi from before this time.

Over the centuries Almoradi has relied mostly on agriculture for its economic survival, although in recent times the manurfacture of furniture has also become an important industry for the town.

Almoradi is notable in the region for its being the home of a water tribunal which exists to resolve disputes over the irrigation of land (this being for many centuries an important agricultural area), the tribunal is an ancient and historic institution which still imposes fines in Vellón  Reals - archaic Spanish coins from the region’s ancient past. Worth visiting in Almoradi are the casino, the church of San Andrés and the Cortés Theatre where traditional Spanish plays can be observed.

Almoradi enjoy a mild and temperate Mediterranean climate with over 300 days of sunshine during each year, and also has low annual rainfall. The summers are generally very hot with temperatures in the high 30's.

Almoradi has a busy Saturday market which attracts thousands of visitors  each week, looking for fresh produce and a bargain or two.

Almoradi has an excellent variety of shops, bars and restaurants and a good range of facilities. The town is somewhat quieter than many of  its coastal neighbours and is becoming an increasingly popular location  for foreign property seekers looking for a taste of the traditional Spain.

As with all Spanish towns and villages, Almoradi has its fair share of  fiestas and festivals, these include the well known Moors and Christians (Moros Y Cristianos) festival held at the end of July. 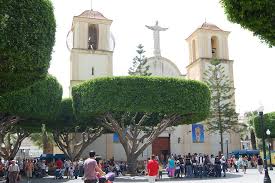 Back to A Spanish Life